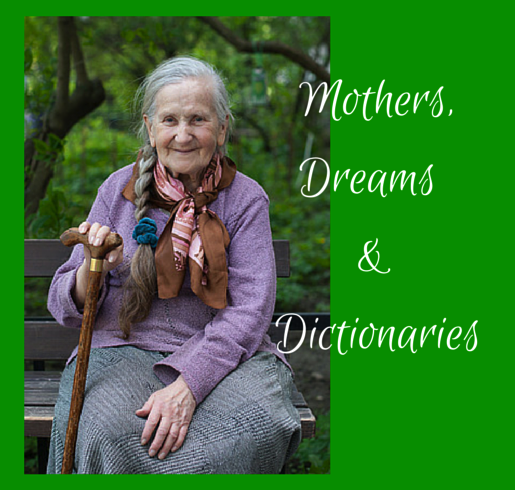 What do mothers, dreams and dream dictionaries have in common? Well, first things first. Let me first admit that it is sometimes challenging to write about the subject of mothers in dreams without discussing the classic theories of Freud and Jung among others. However, in modern dream work, where we believe that only the dreamer can say what their dreams mean, the theories of the various schools of thoughts are best left to academics. What does the word “mother” mean to you? What is your own mother like? Are you a mother? These questions and more, are more likely to get the dreamer to understand their dream’s meaning than any of the classic theories.

The problem is that without a dream group, or the discipline to work with one’s own dreams, dreamers often turn to dream dictionaries. So let’s take a moment to look at that resource. Dream dictionaries have been in existence for as long as we have written history and probably longer. Many dreamers will tell me “my grandmother says that when you dream about [blank] it means [blank]”. Ancient dreamers were probably no different. The Chester Beatty Papyrus is believed to date from 1279-1213 B.C.E. in Egypt, although different scholars will suggest varying dates. Suffice it to say that it’s old! In this papyrus we find a list of dreams, judgment as to whether it is “good” or “bad”, followed by its interpretation. For example, “If a man sees himself in a dream with his bed catching fire, bad; it means driving away his wife”. The Chester Beatty Papyrus is but a fragment, but from the 2nd century Greek dream interpreter, Artemidorus, we have in existence all five of his books called “The Interpretation of Dreams” (www.britishmuseum.org). Artemidorus takes a very rational approach to the meaning of dreams, and some of his ideas seem to be reflected in many theories that are still with us, including the notion that the meaning of any given symbol will vary according to the circumstances of the dreamer. Nevertheless, he too tells his readers that, “this” means “that”. Many of his definitions of symbols are still reproduced today in what might be referred to as “dime-store” dream dictionaries, thousands of years later!

So short of joining a dream group, which is the most rewarding way to work with dreams but not always available, how can you use the resources that are commonly available without giving over your dreamer’s right to find your own meaning? The best dream dictionary, which calls itself a “New Kind of Dream Dictionary”, is Gayle Delaney’s book In Your Dreams. Published in 1997, it is still available and in print. What makes Gayle’s book so useful is her format. She takes common dream themes like flying, being chased, naked in public and so on then proceeds to help the dreamer write their own definition, finding meaning that is personal to them. She does this by citing common variations on the dream, what other dream experts have said, gives an example of a dream in that category, and shows you how to get at the meaning that is meaningful for you in her section called “What Do You Say?”

Using Gayle’s method, we return to the subject of mothers in dreams. How might you go about understanding your particular dream? Begin by describing the mother in your dream. What is she like? Is the mother in your dream actually your waking-life mother or a generic mother that you don’t know? What was she doing in the dream? Was she acting like your mother would act in waking life or doing something out of character? And often most importantly is the question, does this mother remind you of any aspect of yourself? In this simple way, you can start to determine if the dream is giving you information about your mother in particular, your own mothering style or the symbol of “mother” that is reflected in you. If you have an academic bent, you can also see the mother in your dream as a timeless symbol of all women, the Great Mother, a nurturing and creative energy and as a construct within your psyche, but if it doesn’t resonate with your lived experience of the dream, then it is just an intellectual exercise; valuable in theory but not too useful. I believe that our dreams can be useful tools for us to gain greater self-understanding, to change our course in life and to chart new waters. And possibly a great reminder to call your mother!