Soul Growth: The Next Generation

There are a lot of people working on soul growth and if you are reading this, you are likely one of them. There are many of us who have been transforming since the 60’s and 70’s when the Age of Aquarius captured public imagination,  and we are classified by Doreen Virtue and other authors as “Lightworkers”. We are normal people trying to grow and are often in the healing professions, or wishing we were, yet we are still slightly neurotic and have to work very hard at not being nice or dysfunctional. 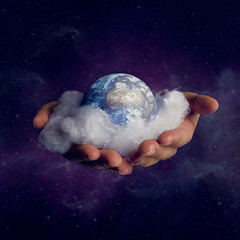 The next generation were the “Indigo Children” (first written about by Lee Carroll and Jan Tober) and later followed by “Crystal” and “Rainbow” kids who are being born now to aid in the ascension process for the planet. This next generation is a lot more comfortable following their bliss and leaving situations that don’t serve their higher purpose, where Lightworkers will stick with it far too long, trying to heal the situation. So while their Lightworker parents (or grandparents) are still talking to their therapists and feeling guilty as they heal and change, these kids will just say “I’m outta here”. They have no trouble being authentic and living in alignment with their truth while their parents wonder how their kids will be able to contribute to their pension plans.

So I shouldn’t have been surprised when my youngest daughter—who is probably an Indigo—sprouted some wisdom that it takes the older generation years to figure out, if we figure it out at all! She said she “prayed [about a certain situation] but knew I had to do my part too.” These kids are just walking Metaphysicians! If you recall all the hoopla about the “Secret” with the unfortunate emphasis on material gains, you may have realized that all that wishing and hoping doesn’t get you what you want. I think the Universe really wants us to take the first step. “Where attention goes, energy flows.” When I first opened my practice (a thousand years ago), I had no clients. But I felt that I had to start somewhere…. “I” had to start. I rented an office in a wellness center in the heart of Toronto and by “coincidence” an article appeared that same week in Massage Magazine about the Rubenfeld Synergy Method® et voilà, I had clients! If I hadn’t taken that first step to be visible, my clients would not have found me.

When we take the first step, we become partners with the Creator. In fact, we become co-creators. And often it’s the children who can teach us how to walk our path with ease. Sometimes we are so focused on our own path that we forget that we have these evolved beings walking among us. Out of the “mouths of babes” come some amazing insights, if only we can pause long enough to hear them. My daughter’s wisdom reminds me that we can’t just wish ourselves into our future, we have to take action, move in the direction we want to go and walk in partnership with Spirit into the future of our dreams. I hope to see you on the path of action!